Canada is taking big steps to reduce immigration processing times, with a hiring ramp-up and additional tools to get newcomers settled in Canada more quickly.

Let’s dive into the latest numbers.

Get the latest immigration updates – sign up for our newsletter!

How many Canadian immigration applications are waiting to be processed?

There are 2.4 million total applications in all IRCC inventories. These numbers are accurate as of July 31, 2022.

However, there are presently more than 1.3 million applications in the inventory—54 percent of applications—that have exceeded IRCC’s service standards. Applications that exceed the service standard are considered “backlogged.” This means IRCC is falling far short of its processing goals.

Does IRCC have a plan to speed up immigration application processing?

IRCC has also committed to publishing monthly data on their website to keep applicants informed of anticipated processing times. In their August 24 announcement, IRCC published data from the month of July, providing detailed figures about current and projected processing times for different types of immigration applicants.

How long will it take to process my Canadian immigration application?

As of July 31, 2022, Canada had a total of 639,500 permanent residence applications awaiting processing. Of these applications, 303,300 (47 percent) were within IRCC’s service standards for processing times. IRCC provided a breakdown of backlog projections by different PR category:

By the end of the year, IRCC expects to meet its stated goal of processing 80 percent of Express Entry applications within six months of submission. 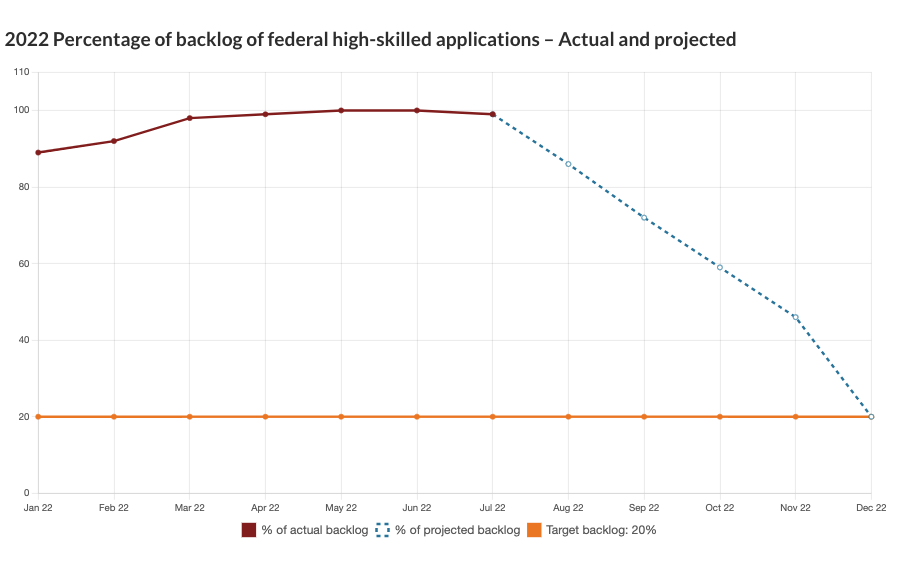 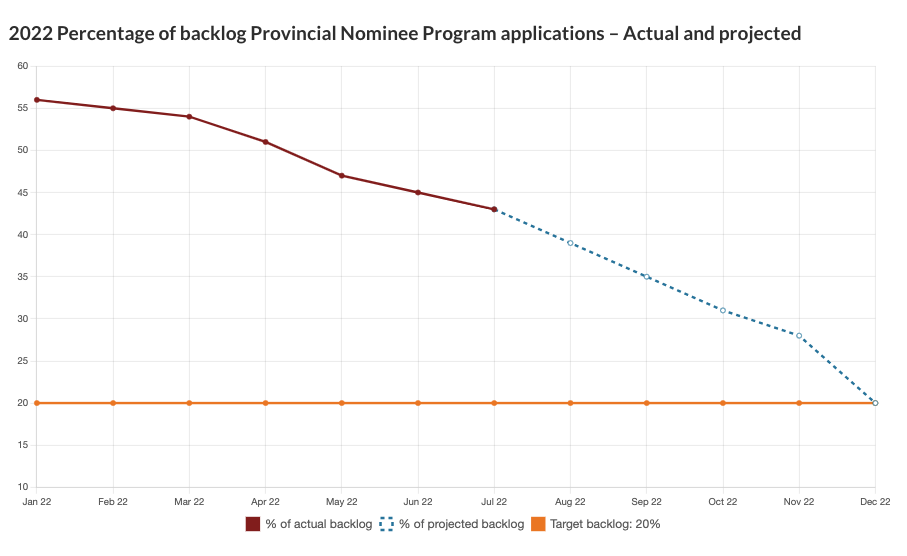 By the end of the year, IRCC plans to process 80 percent of spouse, partner, and child sponsorship applications within 12 months of submission. 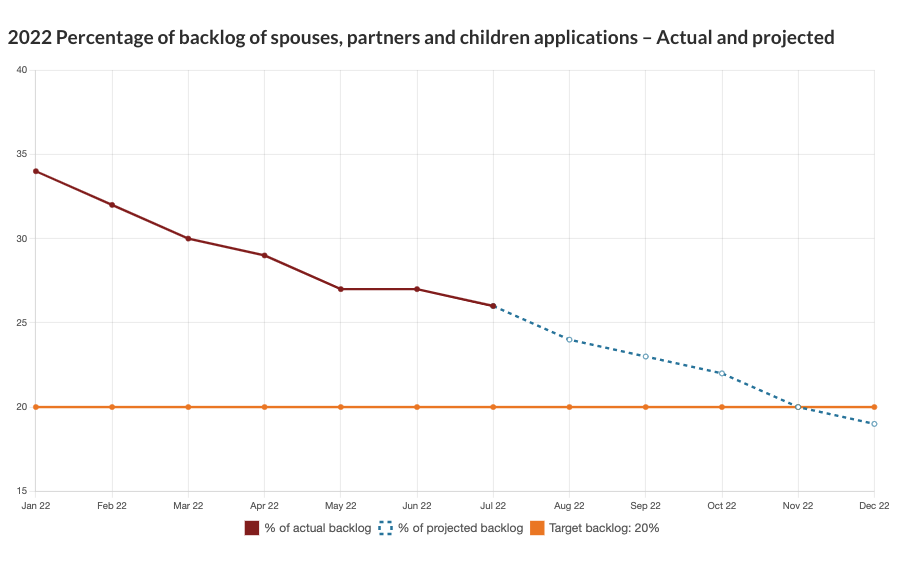 By the end of 2022, IRCC projects it will be processing 75 percent of applications within 12 months of receipt. 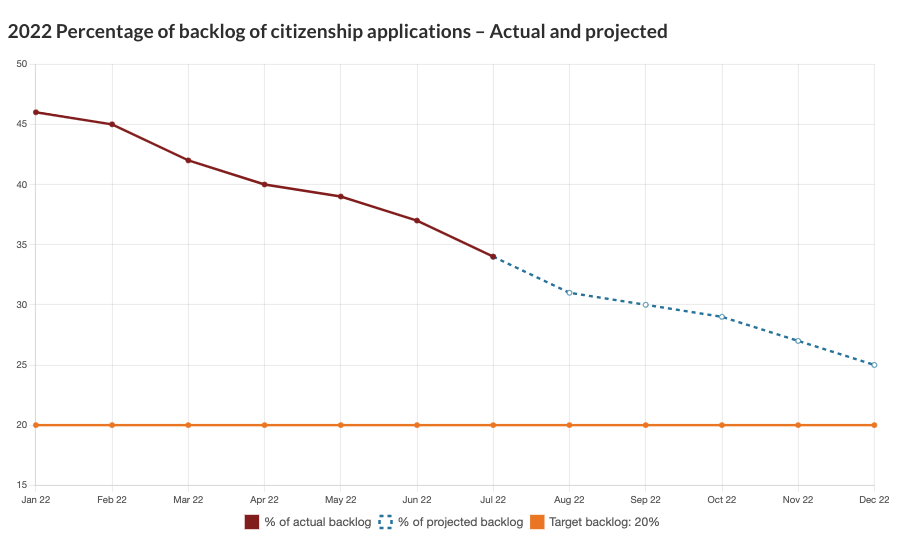 This year, Canada has received hundreds of thousands of applications through the Canada-Ukraine Authorization for Emergency Travel. This program was not anticipated prior to the war in Ukraine and has greatly increased the inventory of Canada’s work permit applications. 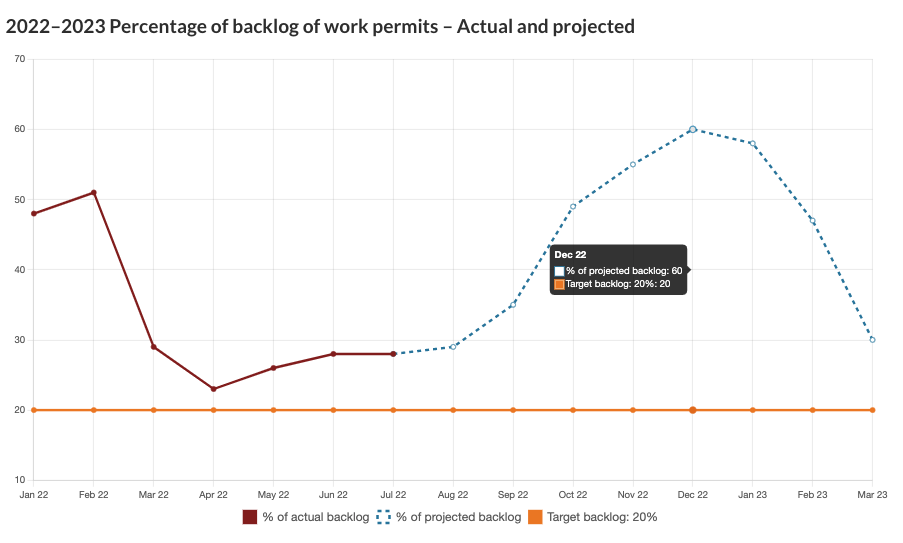 Through the late summer and early fall, IRCC projects that its backlog of study permit applications will grow from approximately 31 percent to approximately 42 percent. This is when many international students will begin their studies, thus a seasonal increase in applications is expected.

However, IRCC anticipates a significant decrease in 2023, with the backlog falling to 23 percent by March. Canada aims to process 80 percent of study permit applications submitted outside Canada within 60 days and those submitted inside Canada within 120 days. 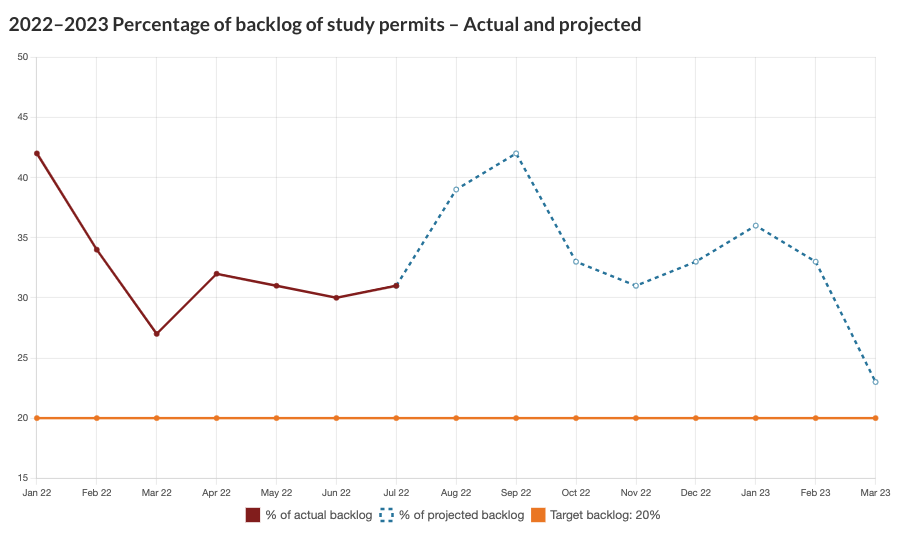 Many visitor visa applicants are experiencing delays with processing. As of July 31, 67 percent of visitor visa applications were not processed within service standards. IRCC anticipates making slow progress on this issue, reducing that percentage to 58 percent by March 2023. How many immigration applications will Canada process in 2022?

2022 has been a frustrating year for many Canadian immigration applicants who have been waiting far longer than expected for their applications to be processed. One of the reasons processing times are so high is because Canada is processing record-high quantities of applications across many different categories.

IRCC is also on track to finalize the highest number of study permits in a single year. Nearly 560,000 study permit applications were finalized in 2021, and IRCC is currently outpacing that figure for 2022.

In addition, IRCC has remained flexible in order to accommodate those in need. The Canada-Ukraine Authorization for Emergency Travel (CUAET) has received hundreds of thousands of applications this year, providing support to Ukrainians fleeing the war. Although this has placed unexpected pressure on the immigration system, it’s a pressure the Canadian government was willing to accept when launching the program.

Canadian immigration processing times have been unpredictably slow over the past few years. With Canada’s upgrades to the immigration department’s processing capacity and commitment to more frequently publish transparent processing data, there are reasons to be optimistic about improvements in the months ahead. However, only time will tell if the government has taken adequate steps to get processing times under control and keep them there.

To be the first to find out about the latest Canadian immigration updates, create a free Moving2Canada account and subscribe to our newsletter.

5 Things Every Aussie Needs to Know Before Moving To Toronto

Do you have health insurance for Canada?

Many newcomers are not eligible for Canadian healthcare coverage when they first arrive.

Our partner, Cigna, offers newcomers a range of comprehensive health insurance policies for peace of mind. Explore your options with a free quote today!

We use cookies to give you the best experience, by browsing - you agree to our use of cookies. More info